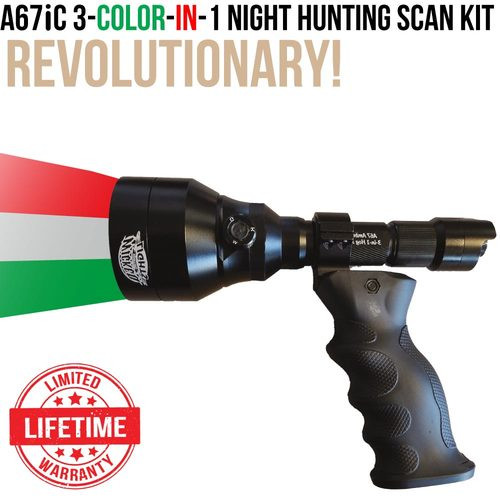 The first key feature is the revolutionary, Patent Pending 3-in-1 Center Axis Rotational Color LED module with LED Position Detent Lock. In laymen’s terms, you have the ability and convenience to select any of the 3 colors (for example Red, Green, or White) with just a slight twist of a knob and have the LED color of your choice lock in place on the center axis of the light body and in the center axis of the spherical lens.

Why is the “center axis” so important you may wonder? First, if the LED is not centered in the center axis of the spherical lens, then the light will not reach its maximum potential in light output (as measured in LUX). Depending on how far off axis the LED is, it will also create an artifact or distortion in the light beam which can affect your field of view when looking through a scope. However, the most important reason for center axis selectability and repeatability is when you mount your light on your scope. With a traditional, single colored led that is centered in the light, you will adjust the windage and elevation so the light is centered in the field of view of the scope (and thus centered on your crosshair). Because one LED is used, and that LED is centered in the light, you can line your crosshair up fairly easy. With a multi colored LED module, you will want each LED centered in your crosshair the moment you change to a different color LED without having to re-zero the light in your scope after each color change. Currently LED color changes are accomplished in one of two ways; (1) physically remove the light bezel and change the LED module or (2) utilize a fixed circuit board with 4 (or more) different colored individual LED’s placed as close as possible on the board that some manufacturers use. 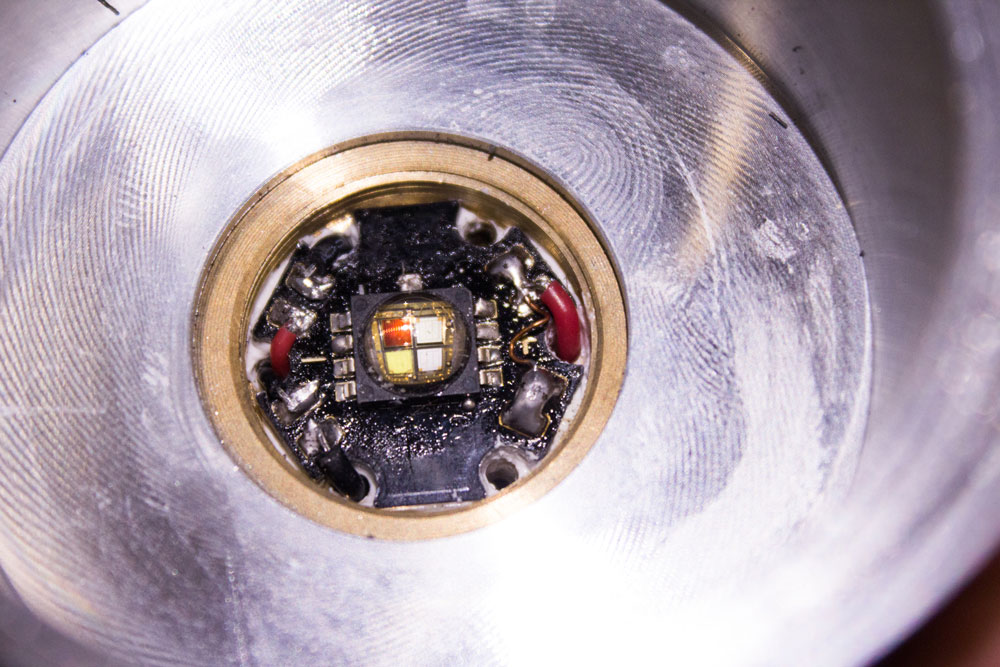 In our endeavor to bring a purpose built multi-color night hunting light to market, we explored and prototyped several multi-LED circuit board designs over the past several years. We developed a design that utilized the fixed circuit board with 4 (or more) different colored individual LED’s (as pictured above) and soundly rejected them for use as a dedicated shooting light. The failure of the four LED board design is that only one LED (at most) is actually on the center axis of the light and centered in the spherical lens. That means that only the one centered LED reaches it full brightness potential. In fact, many of the 4 LED board designs had all 4 LED’s off center access, so none of them could reach their full brightness potential. As alarming a that is, that is actually not even the major flaw with the 4 LED circuit design.

The major flaw is illuminated (no pun intended) when you change to a different color LED. When each individual LED is selected, the output (light beam) will have a different Point of Aim shift / trajectory and shine on a different spot because the LED’s are not centered in the light. Even at a range of less than 40 yards, for example, the beam offset can be as much as 10 feet! See the picture below for an illustration of this flaw. 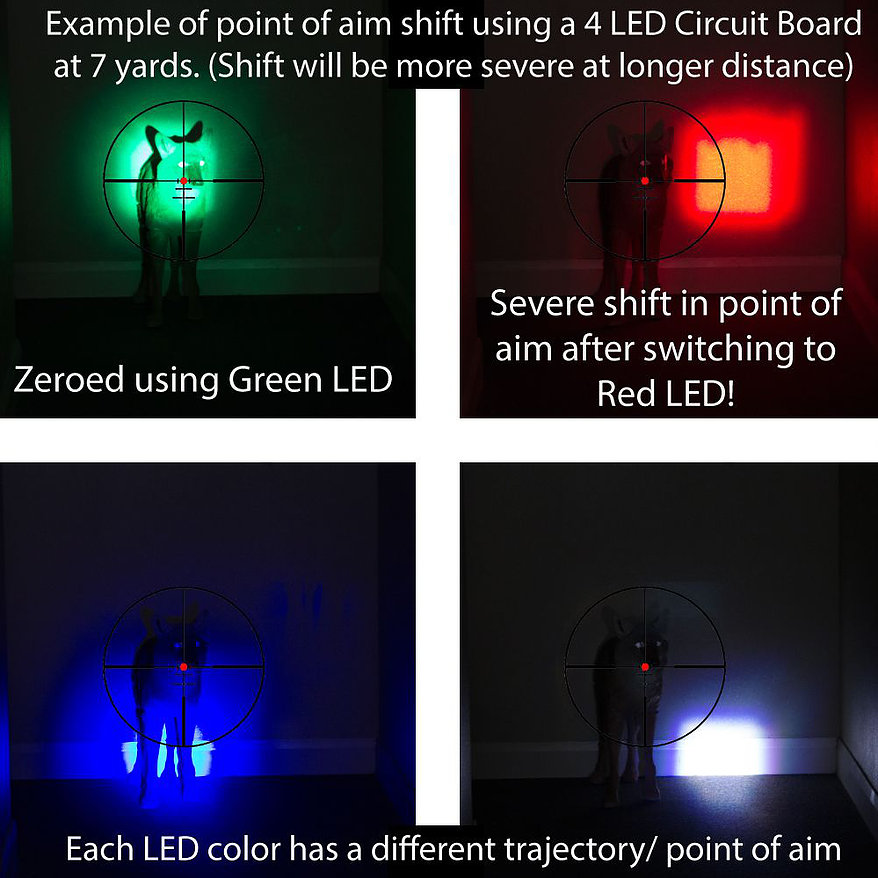 After rejecting the fixed circuit 4 LED design, we started over and designed a rotation system from scratch, which sits on a center axis and rotates between various colors with the twist of a knob. Each LED is perfectly centered in the light when they are rotated into place. We called our new design the “3-in-1 Center Axis Rotational Color LED module with LED Position Detent Lock” and built it into a new model called the A67iC Ambush Light.

With the A67iC Ambush Light you can effortlessly select and change LED colors with a quick turn of the LED color control knob. The patent pending Center Axis Rotation design virtually eliminating the need to perform windage and elevation adjustments to keep the light beam centered in the scope field of view when changing colors.

With the A67iC Ambush Light’s effortless and quick LED color selection ability, you will gain the ability to tailor your LED color to the particular target species, terrain, or climatic conditions like many expert night hunters do.  For example: you can switch to the RED LED while scanning a small 150 yard pasture for coyote or fox or hunting over a feeder or bait pile at close range, on the next stand select WHITE LED while targeting coons in a favorite cottonwood denning tree or abandoned barn, and then go to GREEN LED to scan a large field for hogs rooting or coyotes at long distance. Or maybe you start with a RED LED but the animal is just a hair out of range, so you switch to green to give you that extra range and make the kill. On the contrary, maybe you are using the GREEN LED but the particular animal you encounter is exhibiting signs of being light shy so you instantly switch to RED (so you don't spook the animal) all while maintaining the light output perfectly centered in your scope's field of view. With the A67iC’s patent pending Center Axis Rotational design, there is no need to re-zero the light back into the scope after changing colors. Less time spent fooling around with adjustments means more time spent on target and more animals down. 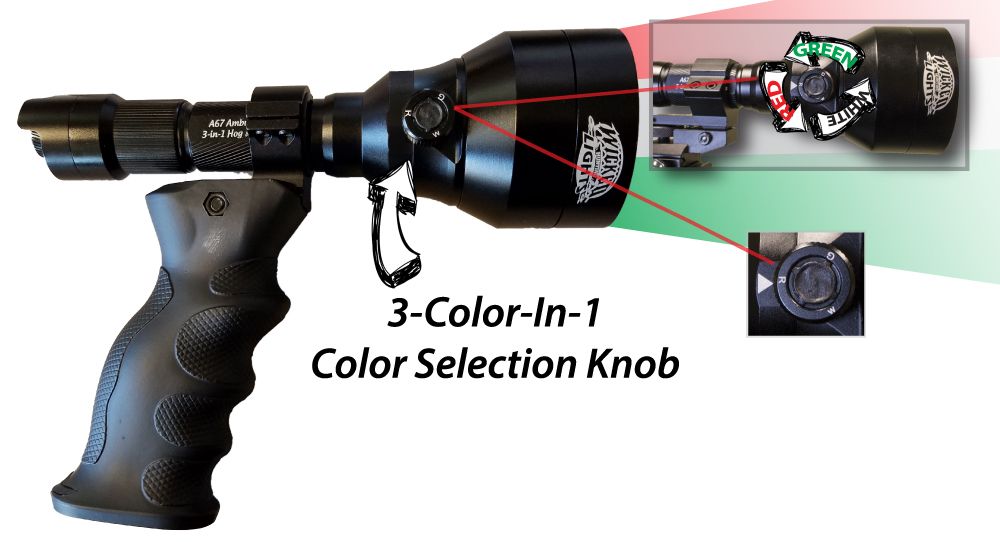 Full Intensity Control--Why do I need Intensity Control? Intensity control allows you to adjust the intensity based on the situation. For example, when calling a small tight pasture a couple hundred yards across you can lower down the intensity to reduce the potential of alerting or shying the target animal from the light (also known as “burning their eyes”) when they first appear. When an animal first appears on stand it’s critical to avoid “burning their eyes”. We recommend using a lower intensity in combination with “flooding” the light beam to a wider more diffused beam. You can then condition the animal with a gradual increase in brightness, which typically will have no affect on the approaching animal through the full range of intensity up through maximum power with a fully focused beam setting. Most animals tend not to notice the subtle or gradual increase in brightness as much as suddenly being blasted by a brilliantly bright beam of light. This intensity control ability is also very beneficial when hunting hogs or predators over bait or feeders from a ground or elevated blind. You can pre-adjust the light intensity for just enough light to clearly see the bait site, but not any more light than needed, again minimizing the potential of alerting or spooking the targeted animals. Because most hunters typically hunt varied terrain (both wide open pasture areas to close small food plots) there are many situations the light does not need to be on full power to be able to identify the animal. The Intensity Control rheostat knob allows the hunter to increase the brightness until they have just enough light to make positive identification. This eliminates the worry of putting too much light on the animal because the hunter can stop increasing the brightness of the light at any time. By using the Intensity Control feature to start on low, then conditioning the animal with a gradual increase in brightness, and stopping when there is just enough light; the hunter will spook less animals, period! 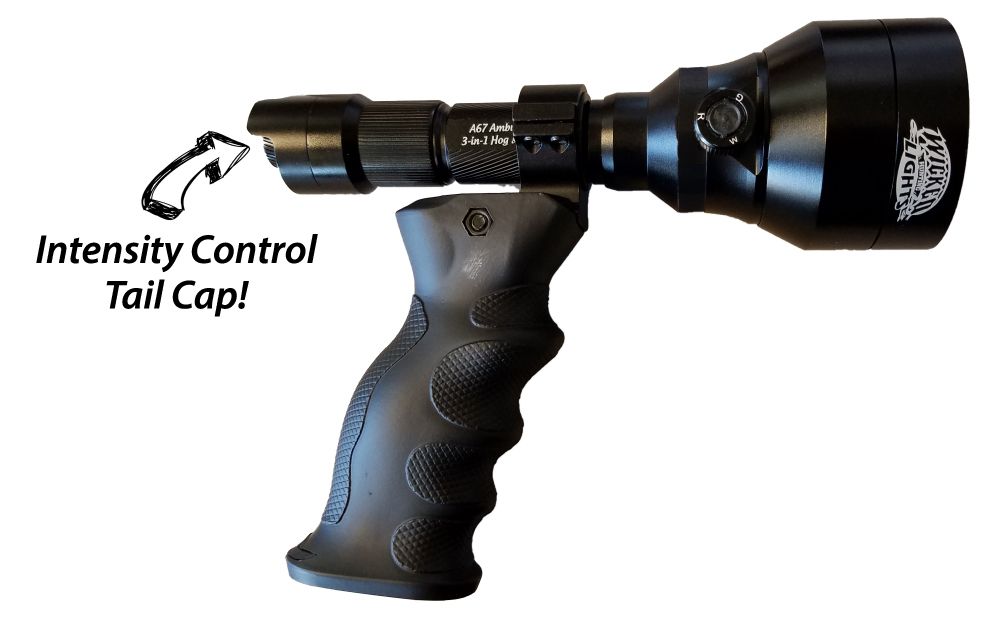 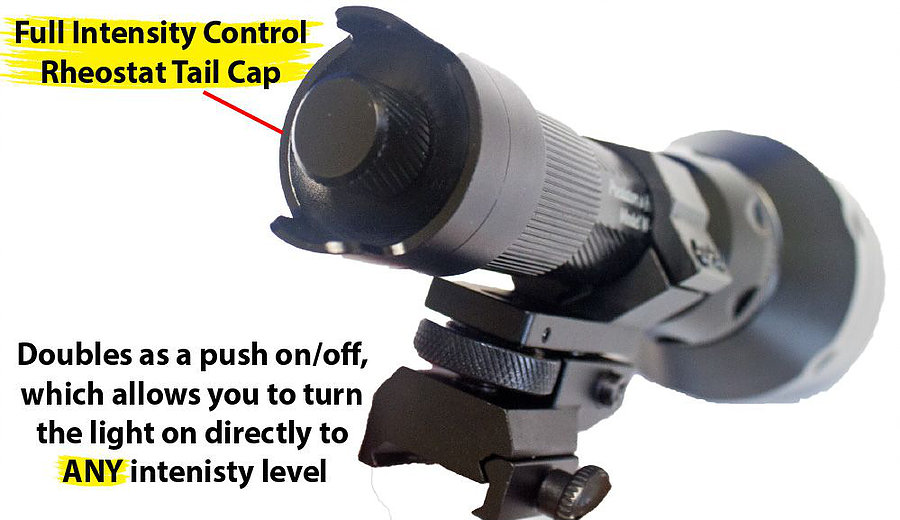 Zoom Focus Rotating Bezel. The ability to adjust the light beam characteristic from “flood” to fully focused “zoom” is critically important. Typically the way the light is being used will dictate how the beam is adjusted. If the light is being used as a “scanning” light, it will be “flooded” which will widen the beam and lower the intensity of the light and aid in covering more area while looking for “eye shine”. Because the beam is “flooded” the benefit will be less potential to “burn the animals eyes” or shy the animal from the light. However, the disadvantage is the distance you will be able to see and positively identify the animal will be greatly reduced. Because of the adjustable zoom - focus you can experiment with beam size and intensity adjustment and find what works best for your particular situation and area. Additionally, many night hunters utilize two lights; one adjusted and set for scanning and looking for “eyes”. Once “eye’s“are detected the hunter will transition to their scope mounted light set to a higher intensity and “zoomed” for positive identification and shooting.